Could the meteoric rise in popularity of the Starbucks Pumpkin Spice Latte have catalyzed a “Pumpkin Boom”? The recent craze for everything pumpkin and a correlated rise in pumpkin sales begs the seductive question of whether a seasonal, brand-specific drink could have revitalized an entire industry.

Some of you may be hearing about the Pumpkin Spice Latte (PSL) for the first time, but others have eagerly been waiting for its reintroduction as the drink is offered exclusively in the fall. Since Starbucks first introduced the drink in 2003, to the dismissive predictions of many, the PSL has seen a phenomenal rise in popularity. Starbucks has now sold over 200 million cups of the PSL, making it Starbuck’s most popular seasonal drink. Each year, Twitter and Facebook statuses loudly clamor the arrival of the PSL. In fact, the Twitter account, @TheRealPSL, enjoys close to a million followers.

Following Starbuck’s success with PSL, there has been an explosion of pumpkin related beverages and foods. McDonalds launched its own pumpkin lattes in 2013, and Dunkin’ Donuts added pumpkin flavors to muffins, donuts and coffees. Baskin Robbins, Kraft, Oreo and even Pringles have introduced pumpkin flavors to their product. Pumpkins and pumpkin products have successfully been marketed as a comfort food that inspires warm image of Thanksgiving, home and the beauty of the fall. Nielson, a global information and measurement firm that enables companies to understand consumer behavior, reports that sales of pumpkin-flavored foods and beverages increased 14% from 2012 to 2013.

In conjunction with this “pumpkin craze” of sorts, pumpkin sales have risen 34% in the last five years, according to the US Department of Agriculture. Virginia, which had no pumpkin farms 15 years ago, now has over 4000 acres of pumpkins. Several commentators from CNN and NBC have thus suggested that the PSL was responsible. Individual farmers have reported that they have seen a significant rise in pumpkin sales since the PSL debuted. Jamie Jones of Jones Family Farms (Shelton, Conn) estimates that sales on his farm are up 25%. While the drink does not even include any real pumpkin in its ingredients, people have argued that PSL inspired a craze for pumpkin related foods that increased overall demand for pumpkins across the country. 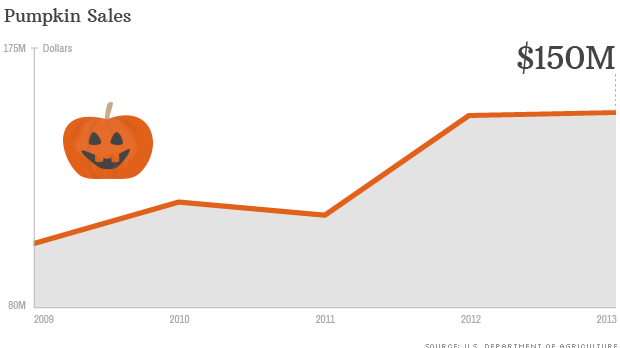 While this is an appealing theory, it is debatable whether the PSL could have single handedly caused a boom in pumpkin sales. The link between the rise of a celebrity drink and an increase in pumpkin sales seems tenuous at best. Most of the pumpkins produced go into filling Thanksgiving pies and it is unlikely that seasonal drinks and pastries could significantly increase overall demand. Instead, experts point to the fact that increased sales could simply be due to increased production. In other words, they argue that there had always been latent demand for pumpkin but that limited production, along with bad agricultural conditions over the past years which prevented farmers from meeting demand. Second, some argue that the growth in pumpkin sales since 2009 could simply be attributed to the recovery from the 2008 recession. All things equal, increased spending power translates into a greater desire to spend on holiday-associated goods. Finally, experts point to the fact that overall value of US crop sales has been continually rising, implying that the rise in pumpkin sales isn’t such an exceptional phenomenon. The rise in pumpkin sales thus more likely reflects a market that is moving from a state of shortage in supply to one that is able to meet aggregate demand. To the extent that demand is increased, this is more likely dependent on factors like population and increased disposable income.

However, if the pumpkin craze has one definite lesson for the rest of us, it will be the sheer power of marketing force (or shall we even say, genius?) of Starbucks. Before deciding to launch the PSL, Starbucks invited customers to pick a theoretical latte (mostly variations of chocolate or caramel) that included a pumpkin pie latte option. The pumpkin pie latte fell near-bottom flat. As if to prove the survey’s point, Einstein Bros Bagels launched a pumpkin-flavored latte before Starbucks did, but quietly withdrew it from the menu. But where the Einstein experiment failed, Starbucks became sensational. With a widespread outreach via social media, and careful emphasis of the fall atmosphere, momentum rose slowly but surely. With a bit of cinnamon or nutmeg the drink could be made at any time of the year but Starbucks cleverly emphasized that that the drink was available for a limited time only, fuelling the instinct to get the PSL now before it disappears. Starbucks enjoyed such success that even Einstein Bros Bagels hopped back onto the wagon with its own slew of pumpkin-infused coffees and bagels.  The drink has  proved itself a heavenly concoction that combines homely comfort with freshly brewed coffee.

Holly is from Singapore and is double majoring in Economics and Government. She is interested in international relations, trade and political economy. In Dartmouth, she is is involved with GlobeMed and Smart Woman Securities. Holly loves traveling, and during her spare time she is looking up new destinations or planning her next trip.

Agralogics and The Internet of Food